Some things are worth waiting for… 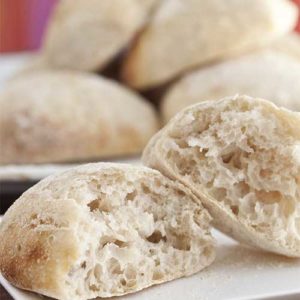 Some things are worth waiting for…

I am sure you can relate to this…i left my sourdough panettone retarding in the fridge for almost 2 weeks – no excuse, but i had been very busy. two early mornings ago, i added the alcohol infused dried fruits, shaped into the panettone mould, then continued to rise it in a covered container – hoping that by evening time, it was fully risen and ready to bake (say 12 hours rise). well – 6pm that night, I had a look and the dough did not move at all!!!

So… what to do…what to do…i had three choice: first choice, to bake it as it was (resulting in a dense brick); second choice, to throw it out (oh…all the precious organic dried fruits 🙁 ) ; last choice…let it be…let see what happens in another 12 or 24 hours…

Well…surprise, surprise…24hours later, it had doubled and i just finished baking it, it cracked on the side, meaning it could have risen some more. oh the vanilla citrussy scent is just amazing…will post a picture soon!

Oh yes…i forgot, panettone can rise up to three times its original volume!

I am making few more tomorrow for my SOURDO FESTIVE class next week SAT NOV 20th.

Love to you all, yoke xox

This site uses Akismet to reduce spam. Learn how your comment data is processed.