Bread – the staff of life 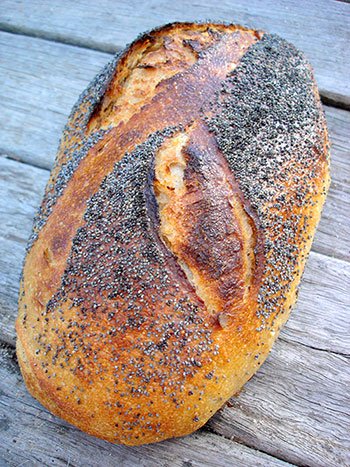 We need the same things to bake bread that we need to build character:

We need the right proportion of ingredients – not too much of this or too little of that.

We need an animating principle, like the yeast or leaven – something to enliven us, a passion.

We need to be kneaded, mixed well by the slow, rhythmic pattern of everyday life. Periodically, we need to rest in a warm place with a towel over our heads.

We need to be punched down, sometimes at the peak of our rising.

And we need to be tested in the fires of suffering.

Ultimately, our lives are without meaning until we’re broken and shared.

We’re not meant to sit on the shelf but to be given away.

– Father Dominic Garramone, On Bread and You

It is well known that the first sourdough was discovered accidentally through grain porridge, which had been left for several days. It started to ferment, producing bubbles and a sour smell. Before modern yeast was discovered in 1680 by French scientist Louis Pasteur, bakers around the world used sour fermented grains as sourdough culture to leaven bread. The oldest sourdough bread known to man was made from emmer wheat, an ancient durum wheat. The ancient Egyptian kept some of the dough to leaven the next days batches of bread. It is a practice that is still adopted by some traditional bakers in many traditional communities today where yeasts are unavailable or unaffordable.

Sourdough or ‘levain’ is an intensely alive mass of fermenting flour and water and wild yeast. The wild yeast is from naturally occurring yeast found in whole grains, and in sourdough it is most commonly known as the ‘saccharomyces exiguous’ yeast. This is the process I use in my sourdough breadmaking. It is a slow-acting yeast requiring a long fermentation process. During this process other lactic bacteria, lactobacillus plantarum and lactobacillus brevis, cause a secondary fermentation that create their own by-products, lactic and acetic acids, and decrease the pH of the dough creating the characteristic sour flavour of sourdough.